Bass Hall will be filled with reels, jigs, hornpipes, waltzes, and airs when Sarah Bauhan and The Elmwood Station Band take the stage on Saturday, January 11 at 7:30 p.m. Don’t miss an evening of music from Ireland, Scotland, Shetland, England, French Canada, Sweden, and New England, as well as original compositions that capture the sometimes buoyant, often haunting spirit of Celtic music.

Sarah Bauhan on whistle and flute will be joined by Jane Orzechowski on fiddle, David Surette on guitar, mandolin, and bouzouki, Kent Allyn on piano and bass, Russell Orzechowski on accordion and fiddle, and singers, Susie Burke and Chloe Green.

Bauhan, a native of the Monadnock region, is a noted Celtic flutist and whistle player who has been part of the New England traditional music scene since her teenage days in the 1970s. Sarah’s longtime musical collaborator, Jane Orzechowski, is a 2019 recipient of the Governor’s Arts Award and is best known for her work with Old New England and The Sugar River Band.

One of New England’s finest guitarists, David Surette is known as a top player and arranger of Celtic fingerstyle guitar but is equally at home with the mandolin and bouzouki. His longtime partner, singer Susie Burke, has “one of the finest, purest ballad sopranos heard in folk music today.” (Scott Alarik, The Boston Globe). Russell Orzechowski, also a member of The Sugar River Band, has played traditional music at festivals from New England to New Zealand. Kent Allyn is an in-demand accompanist and studio musician who has played on recordings for Cormac McCarthy, Harvey Reid, Cosy Sheridan and many others. Chloe Green’s lovely vocals round out the Elmwood Station Band.

The band came into existence while recording Sarah’s latest album, Elmwood Station. Sarah named the CD for the historic 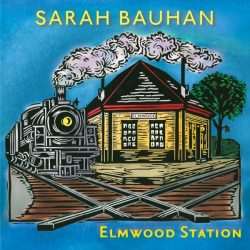 train station near her home. After a successful launch with accompanying concerts, the band signed up to keep playing together because it was so much fun!

NOTE: This concert is SOLD OUT!

Music in Bass Hall is produced by the Monadnock Center for History and Culture.